In 2019 RSIE was selected by Iarnród Éireann / Irish Rail (IÉ) as the preferred bidder for a €40m contract to provide track maintenance services for the national rail network in Ireland. IÉ operates city and commuter rail services within Dublin and Cork as well as intercity services throughout Ireland.

The contract includes the operation and maintenance of 14 On Track Machines (OTMs). RSIE deliver tamping, ballast regulating, ballast cleaning and other OTM operations across the IÉ network. These works are carried out by RSIE’s team of operators, many of whom have decades of experience in the rail industry.  The operators are supported by a management team, trainers, a maintenance team, and office staff.

The maintenance and overhauls are carried out by RSIE’s highly experienced maintenance team, which includes front line fitters, engineers, stores, and management. The central store facility in Kildare currently holds over 3,000 items on stock.

RSIE also has a unique business model within RSRG as RSIE does not own any of its own machines.

IÉ retains ownership of the fleet of OTMs and RISE operates and maintains the fleet on its behalf for the duration of the contract.

A number of new OTMs have been purchased by IÉ since 2019 which RSIE will also operate and maintain on behalf of their client.

In early 2022 RSIE was awarded a Gold level rating from EcoVadis in recognition of its sustainability ethos. The Gold rating places RSIE among the top 5% of the approximately 85,000 companies rated by EcoVadis across all industries. RSIE is also just one of 285 companies in the rail and road industries to hold any level of EcoVadis status.

RSIE is licensed to operate on the Irish railway network by the Commission for Railway Regulation (CRR).

The company is also certified as an Entity in Charge of Maintenance (ECM).

Facts and Figures about RSIE

A joint taskforce of Rhomberg Sersa Ireland (RSIE) and its client Iarnród Éireann / Irish Rail (IÉ) delivered an engineering change to an RM 90 ballast cleaner to move the typical outdoor position for an operator, to an indoor position.

This was the first time this change had been carried out on a ballast cleaner.

The in-house change was part of a major project focused on the ballast cleaner in order to identify, prioritise and deliver on improvements. 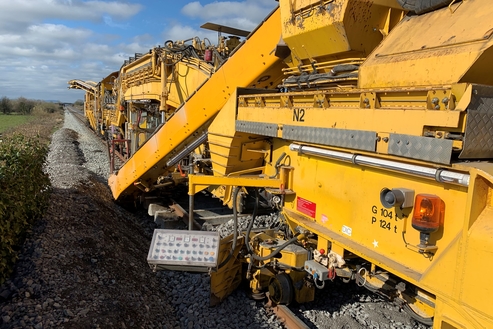 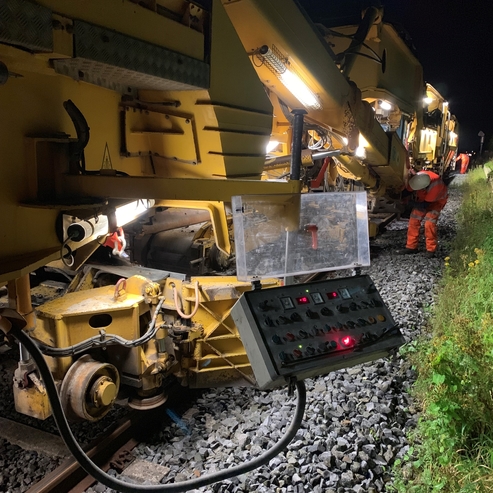 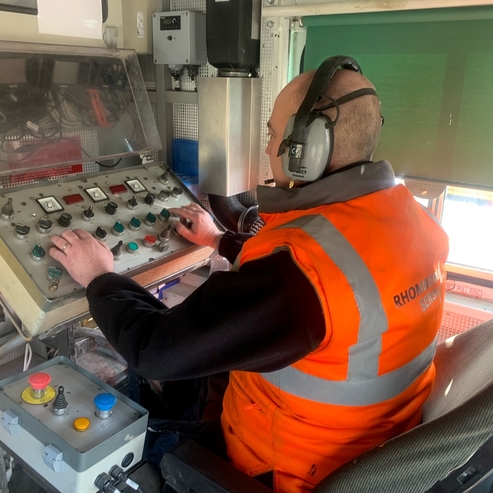 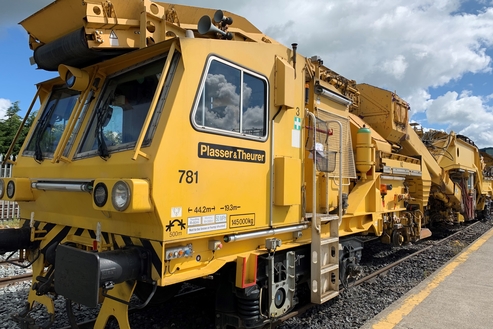 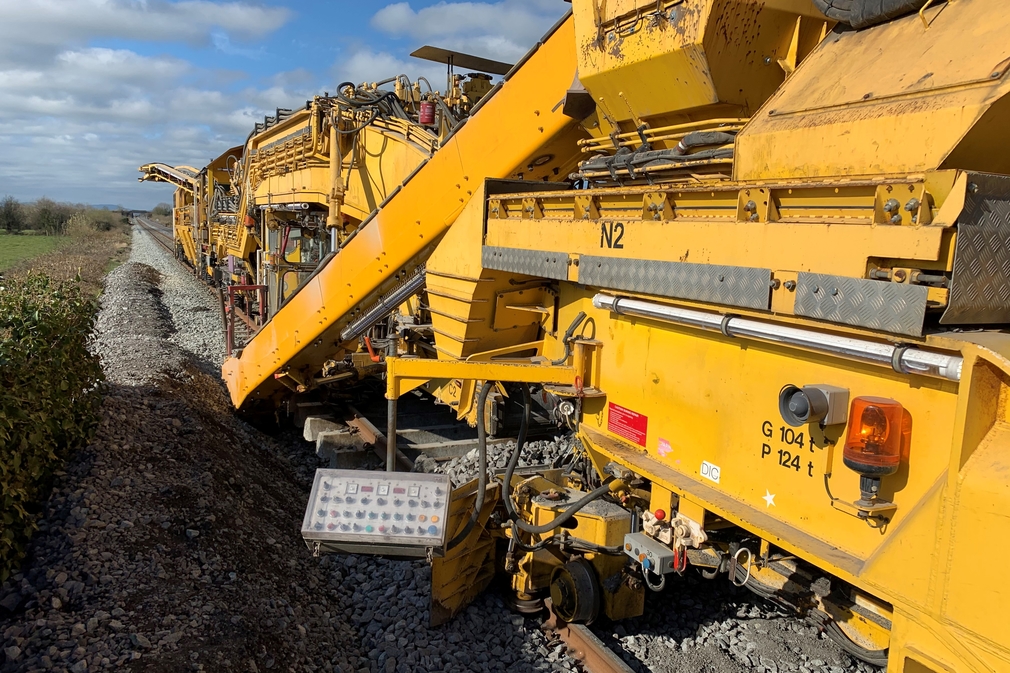 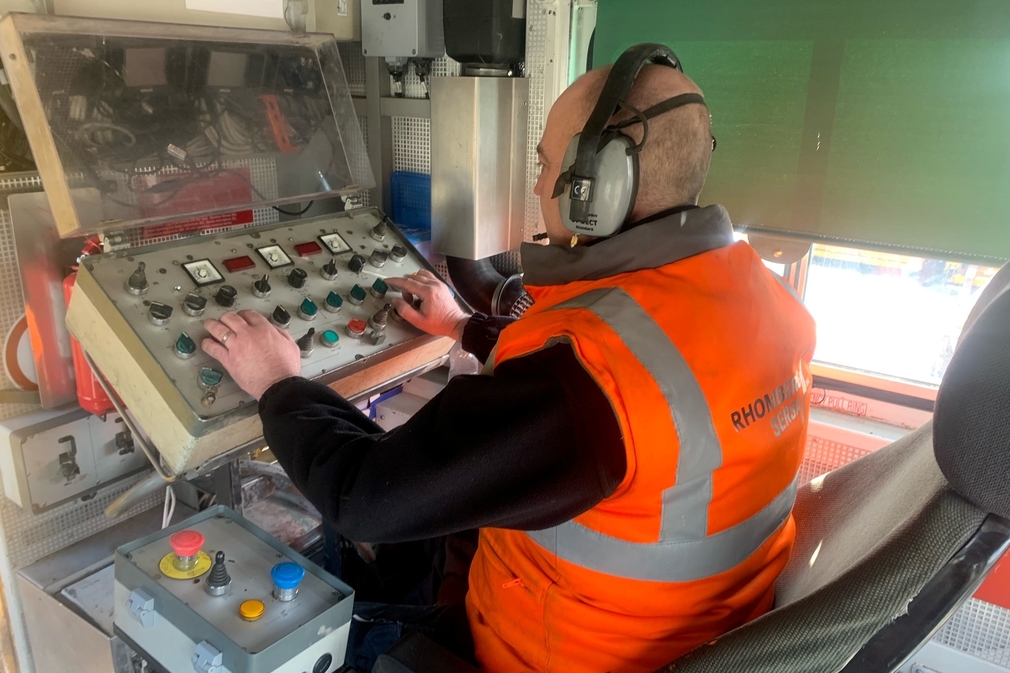 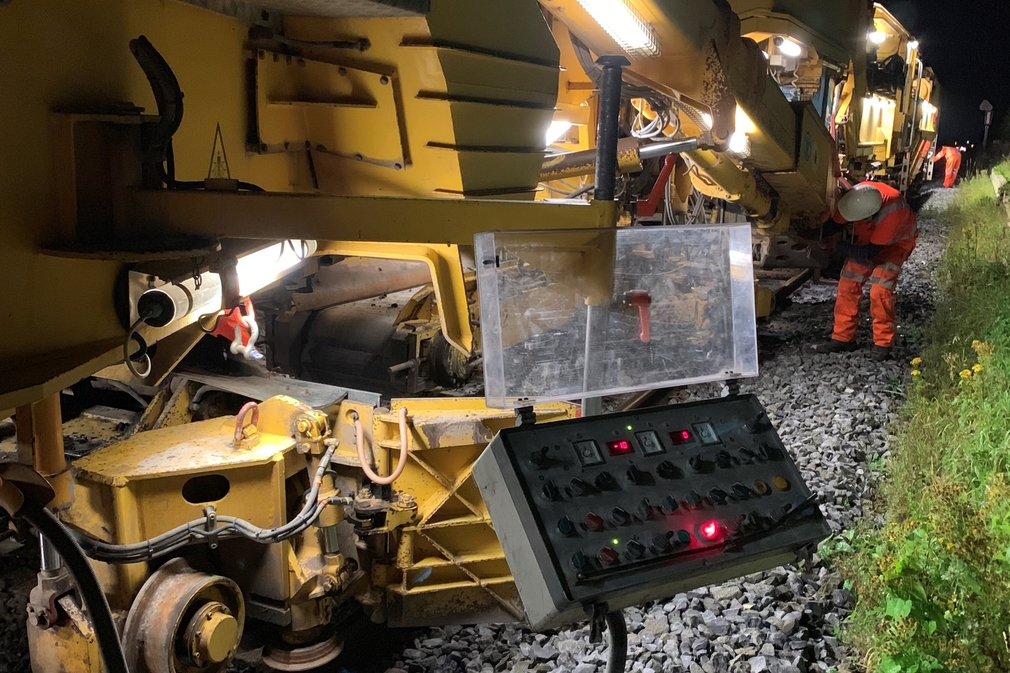 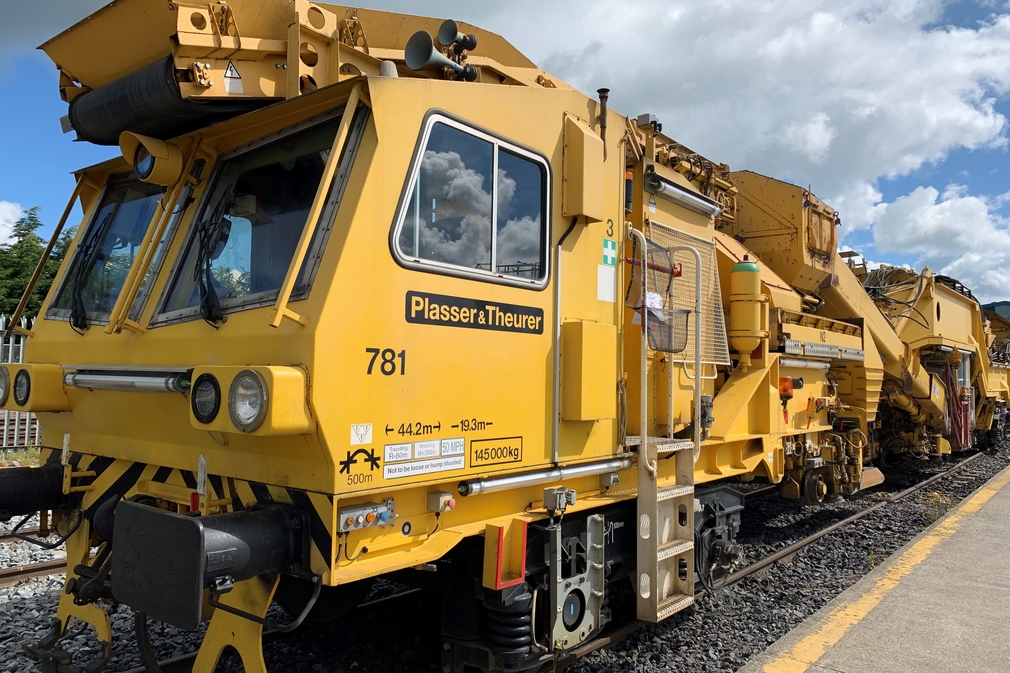 The changes delivered as part of the wider project include:

The biggest engineering change carried out as part of the project was to relocate the operator from the outdoor C2 position to the drivers cab during ballast cleaning operations.

This modification was assessed to have a low monetary cost to implement but it increased the efficiency of the OTM while also increasing the cutting time between required breaks. It also reduced safety risks to operating staff.

It was agreed to examine the possibility of engineering the change as a result of a study looking into the C2 operators’ station during ballast cleaning, as well as feedback from the experienced operators of C2.

The operator would normally be expected to control the C2 station while walking alongside the OTM. This position left the operator continuously exposed to a dusty environment and adverse weather conditions for extended periods. The conditions underfoot could also be challenging, particularly when walking on cess ballast, leading to increased fatigue and risk of injury for the operator.

While the feedback from the wider rail community was that the change would not be possible, the RSIE engineering team believed that it was, pending being able to overcome one of the biggest challenges - the space restrictions within the cab.

The window could not be obstructed while there also had to be sufficient space for a seat, an operating panel, as well as a number of monitors.

The solution was a simple one – a swivel seat. This meant that while the seat was typically used as a guard seat, during operations it swivelled to become the operator’s seat.

Outside, four cameras were installed with live footage fed to four monitors inside. The C2 operator’s role is to redistribute good ballast and the live monitors allowed the operator to do this from the comfort of inside the cab.

The cameras were initially installed in temporary positions to allow for adjustment and refinement and they are now in a semi-fixed position.

However the control panel can be easily moved so that it is still available to be used outdoors for setting up, packing away and ramping in and out purposes.

A number of risk assessments were carried out and the team ensured there was full compliance with all safety and regulatory requirements.

Ultimately the OEM design was not changed but enhanced with the original feature of operation unaffected and still available outdoors if required.

This engineering change was carried out in tandem with a project to protect the “golden hours” when the ballast cleaner was working on the tracks.

Prior to the project, the ballast cleaner was utilised for only 57% of available possession time, mostly due to a three hour maintenance break after 10 hours of cutting. This process had existed for many years and had come about due to perceived and actual reliability data from the machine.

As part of the changes, fitters were integrated into the operations team, changing the team configuration from four operators to two fitters plus two operators.

The next stage was the creation of an onsite maintenance plan which supported three types of maintenance – non-stationary, stationary and full stop. By creating a new standard with an event timeline and relocating the tools required for each task into a local position, the maintenance tasks could be carried out rapidly and more efficiently.

The result is that non-stationary maintenance is now carried out by an extra staff member while the machine is in use, delivering an increase in productivity of up to 42% per weekend possession. 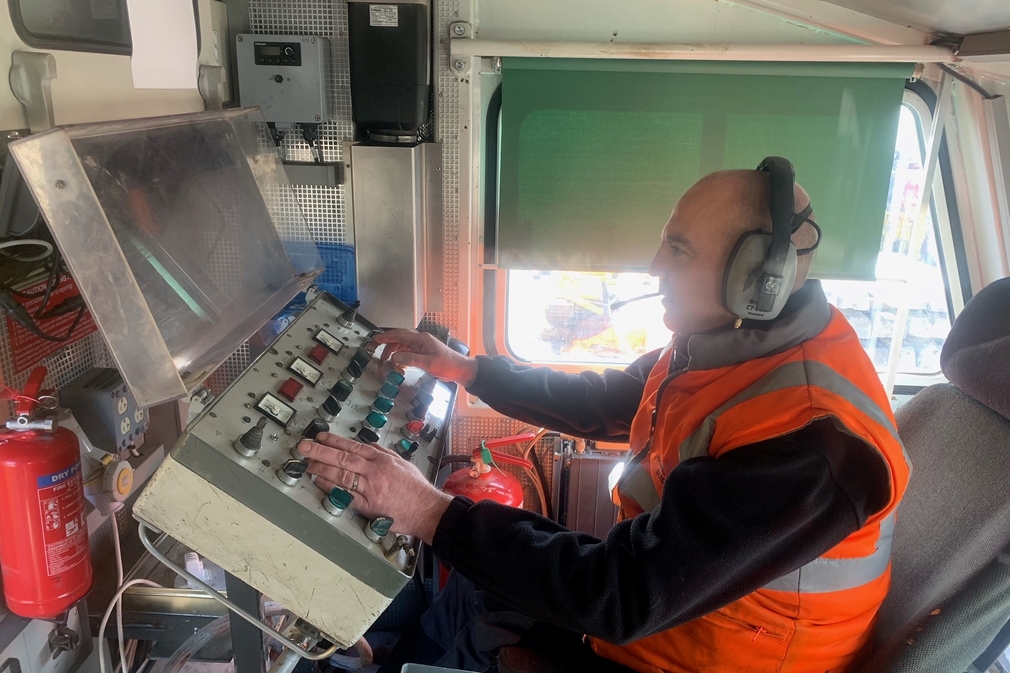 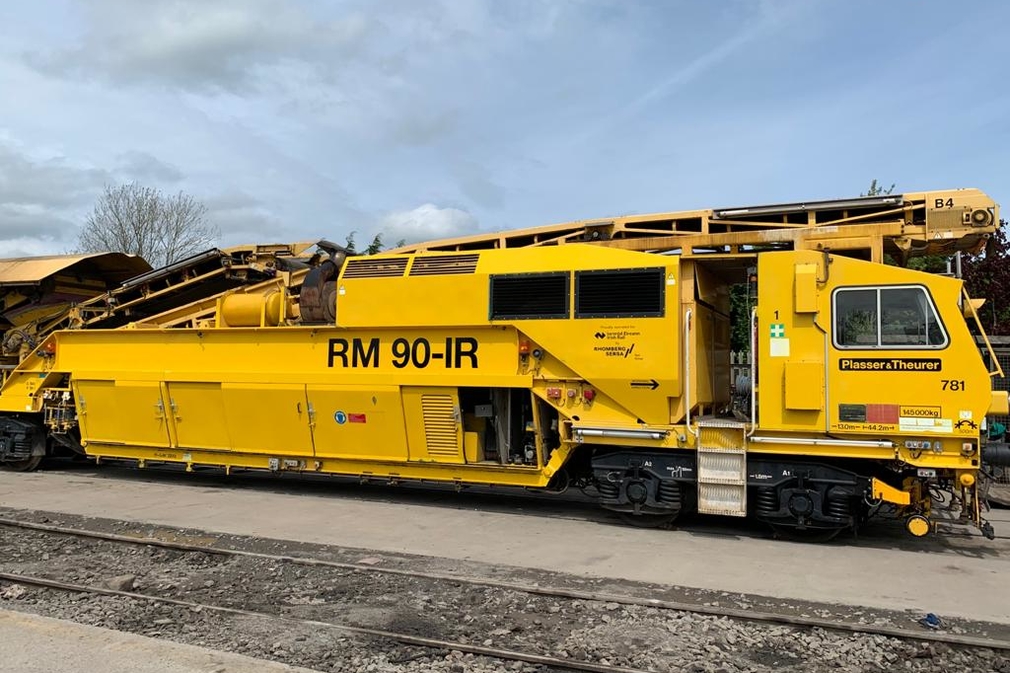 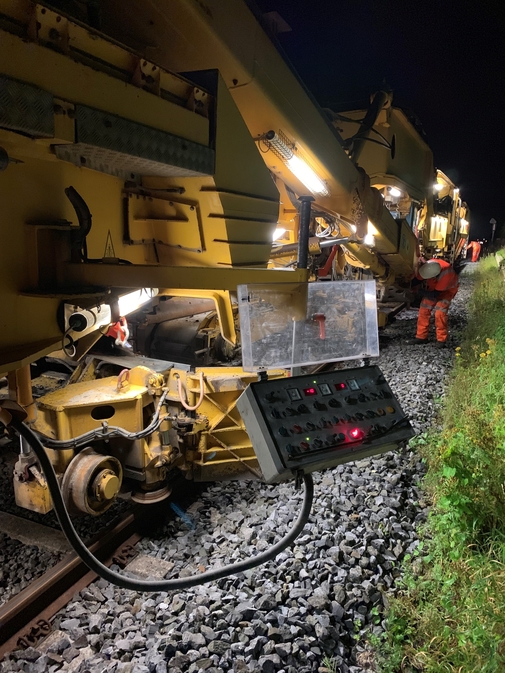 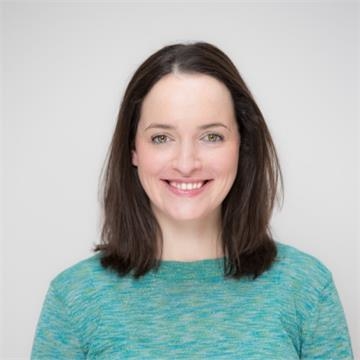 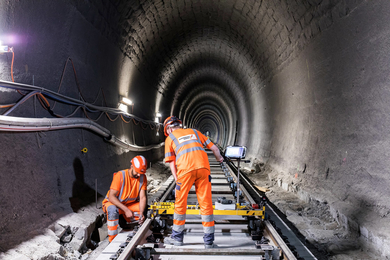 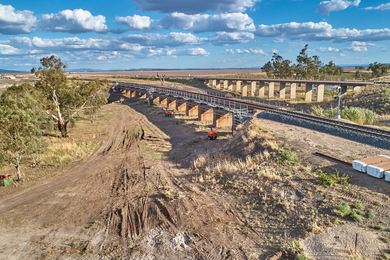 Rhomberg Rail Australia is one of the largest self-delivery rail companies in Australia. 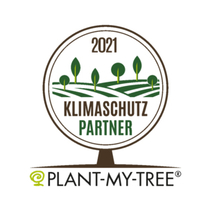